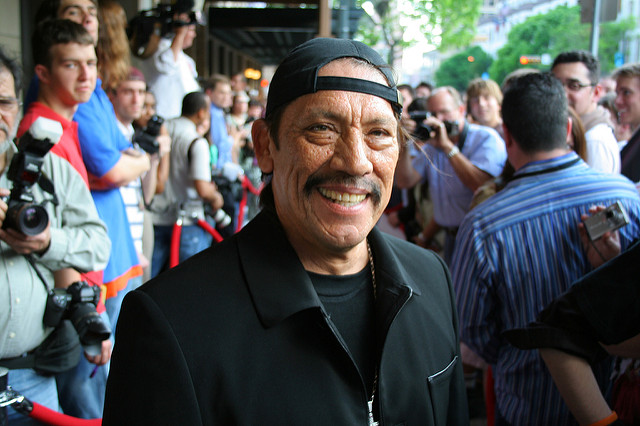 Danny Trejo is best to know for his role Machete in same named movie. It is a weird movie with lots of action. Danny Trejo usually portraits characters that are nasty, scary and violent.

When he is a main character in the movie, then you know this film will have lots of action, and it will be a very violent movie. But he also acted in some big movies and there he was a bad guy. Movies like “Heat” from 1995 and “From Dusk Till Dawn” 1996. He was the only actor who acted in all 3 “From Dusk Till Dawn” series. ?But Danny Trejo is a real superstar; he acted in 325 movies. And in 2017 we can expect even more movies from him.

His trademark is the big Mexican woman with sombrero tattoo on his chest. If you watch Trejos movies, you probably see that. He filmed many prison-related movies where he was having just one or two lines of text, but his tattoos wherein primary focus.

But under all that violent roles there is a good man who opened “Trejos Tacos” Restaurant. But the interesting thing is that his restaurant has healthy food, vegan food, vegetarian food and much more options for gluten free food. He knows that food market is turning and many people realize that meat is poison, especially this industrial meat that is served in cheap restaurants or bought in cheap supermarkets.

I don’t think Danny Trejo is vegan, but he is promoting a vegan lifestyle by giving all vegans options to eat healthy vegan tacos in his restaurant. There are many tacos you can choose, and I’m sure you will love them.

Danny Trejo, good deeds don’t stop at serving healthy food, he will also donate all unused food to the homeless shelter. Imagine if all restaurants would do that, homeless people will not be hungry, and in fact, there will be less hungry people in the world.

It looks like vegan time is head of us. People start to realize that vegan food is the best food that can cure their health problems that they got by eating crap all these years. More and more people turn to healthy food. Restaurants who don’t follow a trend will shut down or lose clients and at the end go broke.

You can find Trejos Tacos Restaurant in Los Angeles. Tacos at Trejos restaurant are cheap, only 4$ for Black Pepper Tofu. You can even order online trough they website.