Carl Lewis is one of the vegan celebrities that deserve to be on the Beegans website. But before everything, we must agree that most of the medals he won were on a “normal” diet. However, his normal diet was far from ordinary. He admits that on a vegan diet, he could run faster and jump longer. He started with a vegan diet back in 1990 when his career was in its third stage. But thanks to the vegan diet, he won gold on 100m as well as 4x100m relay in Tokyo 1991. He also won a silver medal on the long jump. 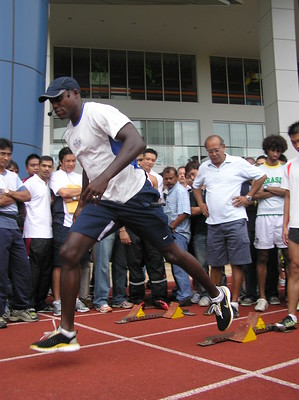 Since the switch to a plant-based diet, he won a gold medal on 4x100m relay and Long Jump. These medals were won in 1992, 2 years since he switches to a vegan diet. He managed to win in the Olympic Games in 1996 when he was 35 years old; he managed to make the longest long jump. In 1993 he won a bronze at a world championship in Stuttgart. At the same world championship, he finished fourth on 100m race.

Carl Lewis’s diet was a mess; he was not eating throughout the day and then was eating large meals for dinner. He forcefully stops eating because, as a runner, if you are lightweight, you can get better results. Now when he switches to a vegan diet, he can eat plant-based food and not worry about gaining excessive weight. Minerals and vitamins he got from plant-based food are an additional boost. All in all, if he didn’t change his diet, he would probably retire much sooner.

Switching to a vegan diet was not easy. After all, he is a guy who trains a whole day. And when he is off the track, he is resting. So he needed someone to cook for him. He hired a private chef, and that helped him a lot in his switch to a vegan diet. At 30 years, he managed to set a new world record on 100m. For comparison, Usain Bolt retired at 31 years. He set a world record on 100m when he was 23 years old. And that record was 9.58, while Carl Lewis set his best result when he was 31 years old. All personal bests Carl Lewis did was after he switches his diet.

Even today, when magazine’s great lists of GOAT athletes Carl Lewis is there. The main reason for that is ten medals on the Olympic Games and ten World Championship medals. He dominated 100m and 4x100m relay race. But probably if you ask him, he loved long jump more; he got ten medals in a long jump. His last medal is a gold medal from 1996 in Atlanta, Olympic games. Because of that achievement, he is voted a “Sportsman of the Century” in 1999. He was also elected “World Athlete of the Century” as well as named “Olympian of the Century.” In 2010 he entered New Jersey Hall of Fame. In 2016 he joined the Texas Track and Field Coaches Association Hall of Fame. Since 2018 he is an assistant track coach at his alma mater, the University of Houston. The University of Houston named Carl Lewis International Complex after him.