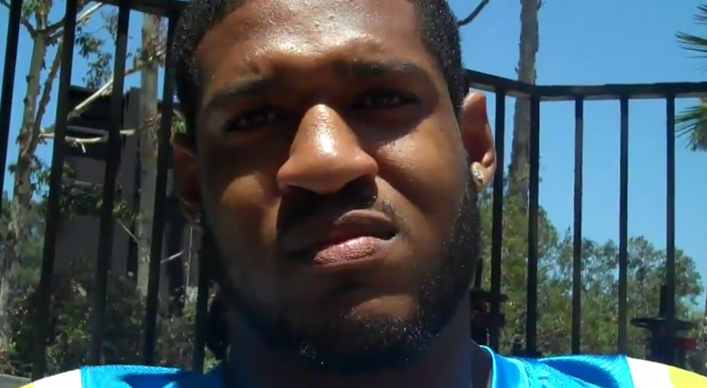 David Carter is a 300-pound defensive lineman for the Oakland Raiders in the NFL. He does not eat any animal products. This means that he is a vegan. He was born on the 10th of December, 1987 and is 6ft. and 6?? tall.

He grew up eating meat and believed that it was necessary to do so for him to grow big and become strong. According to him, every nutritionist, trainer, coach, as well as a doctor he interacted, encouraged him to eat animal products. He listened to them and followed the regular athlete?s diet plan, which included whey protein, lots of milk, raw eggs, as well as casein. Most of the supplements he used to take contained animal products.

Carter realized that all the efforts he was making were to become big and strong. And that was actually killing him. One night while watching Forks over Knives on television with his wife, he discovered that eating animal products could actually kill him. There and then, he decided to go vegan.

Carter says that he always saw the benefits of being vegan but he never thought he could rely on a plant-based diet and maintain his weight for football. He also believes that being vegan is the most efficient and humane way to gain overall body strength.

Carter became a vegan on the 14th of February, 2014, which was a Valentine?s Day. He has since become an advocate for animals and has also created a website, the 300lb Vegan. On his website, he revealed how eating vegan food is the best option for his long-term health.

Carter feels that embracing a diet that is wholly plant-based was the best decision he could ever make for his body, mind, as well as spirit. He further says that a professional football player lifespan is only 56 years. That is mainly because a professional player consumes large quantities of animal products, which leads to dangerous diseases, including heart disease, various types of cancer, stroke, and other chronic diseases.

Carter believes that because of his decision to become a vegan, he has changed his own life as well as countless lives defenseless and voiceless animals everywhere. He also believes that veganism is great for our planet. Also, he says that going vegan has given him a greater purpose, which is bigger than himself.

Carter says that he has felt better since going vegan. After a few months of going vegan, his joint pain disappeared. Hi is also able to lift more and run faster, and in addition, he has less body fat now. Carter has shown the world that it is possible to thrive and have enough strength to play football with the strongest and biggest meat eaters. His favorite food is green smoothies.