Home
/
General
/
Dominion – Who are you?

I just watched Dominion, and it hit me hard. I am speechless, ashame and can’t believe this is something that is going on in the world right now. I knew the situation is terrible, but I have no clue that this is happening. And in this Dominion Documentary review, I will like to focus more on the people than on the animals.

Review about Dominion can not have spoilers, even if I describe everything to you in as many details as possible and after that, you go watch the movie you will still be extremely shocked. The whole film is about animals abuse. Narratives: Joaquin Phoenix, Rooney Mara, Chris Delforce, Kat Von D, Sadie Sink, and Sia are taking you on a horror tour through the slaughterhouses and animal farms.

The first scene starts with Joaquin Phoenix saying:” Most people consider themselves animal lovers.” This is a fantastic start to the horror story you are about to see because later on, you can ask yourself what’s wrong with this world.

The documentary is done in chapters, each chapter has its own narrative, and there is a total of 18 chapters, not counting the intro and final conclusion.

Narrated by Rooney Mara, it hits you right in the core. Maybe it hit me more than other people from other parts of the world because in my location pigs are slaughtered for meat in huge numbers. In deep details, you will see what is going on in pig farms and slaughterhouses. You will notice that the difference between free-range pig farms and conventional pig farms is none!!!

I thought that things will go easier with hens, but no. It hit me even harder when I hear Joaquin Phoenix voice speaking about separating male chickens from the female by the color. Industry modified these hens to mark male chickens in brown color for easier separation. After they separate them, the male chickens are considered waste and sent to macerator – industrial meat blender. And they are thrown in the macerator alive. My heart broke at watching this because at my animal shelter I have hens and a rooster.

Until now I knew this is a hard documentary that cannot be watched without emotions. But what are they doing to these chickens is for the prison. These chickens are designed by humans to grow fast to a large size. This rapid growth is tough on the bones, and these chicken cannot stand on they own, not even walk. In only 35 days of their lives, these chickens are ready for slaughter with 3 kilograms. If you compare that to natural growth, a chicken will need almost 100 days to grow to 2 kilograms. Now you do the thinking and ask yourself what kind of breed is this and what are they feeding them. 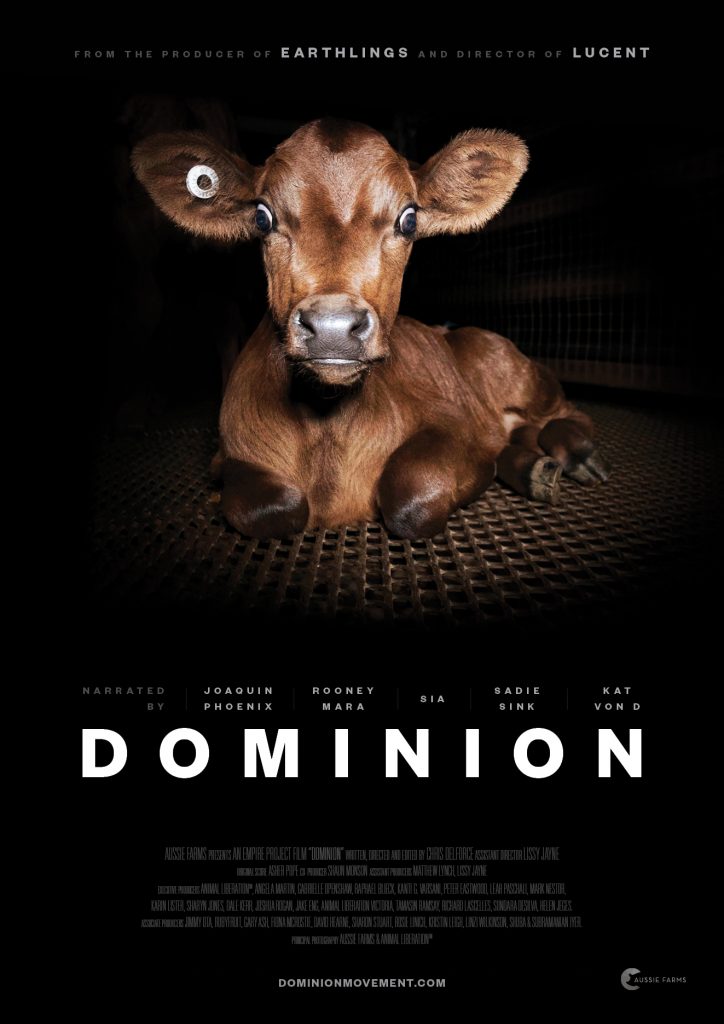 Kat Von D lead us through this chapter, and I need to say that all that is done to hens is done to turkeys. These birds are also genetically modified to be large and to be able to grow at rapid speed. Smaller slaughterhouses are using cones to kill turkeys and once you see that you are about to throw out.

Sadie Sink is leading us through a part of one of my favorite animal. Ducks, in my shelter I have ducks, and they are such beautiful creatures full of love. They play, stay in groups and take care of each other like a real family. But these ducks are also altered genetically. In just 7 weeks ducks grown in industrial farms are ready for slaughter. In China, they are plucking ducks for, and they do it all while the ducks are alive.

I knew in my subconscious mind that there need to be cows in the movie, but I already had enough. Once I saw title Cows and hear Joaquin Phoenix staring with:” Like humans, …” I was about to cry. This big lovely animal, so related to humans with extremely maternal instincts are raped by humans, they young is kidnapped at first days to keep the milk production 100% for the factory. You need to see a cow that just got their kid captured. I have no words to describe that. 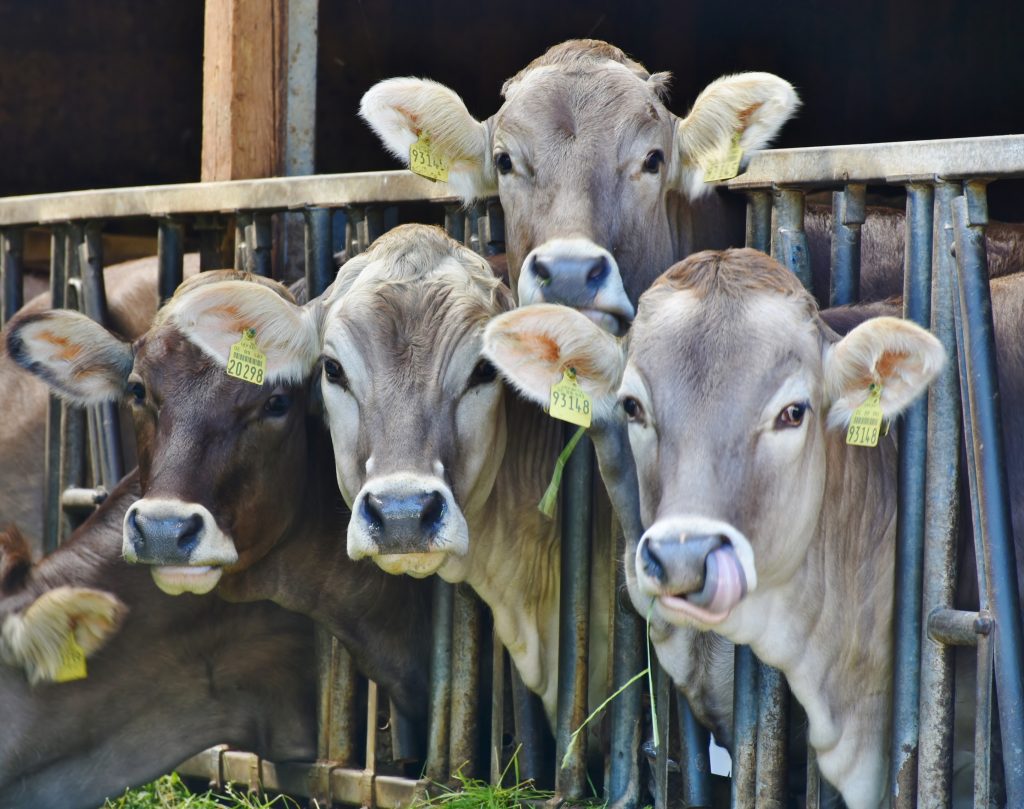 You will think that you have seen all until now. Slaughtering sheep is as nasty as the cow. The same method is used. Bolt gun and the knife, with lots of kicking and usage of other tools to abuse an animal. But Sheep have their tails cut as well as the skin around their buttocks is cut off. Now I know what a lovely animal is a sheep. I have two of them. I saved them from slaughtering, I could not save them more sadly. After two months sheep in my shelter started to play, they are having fun with other animals, and they really love to eat. Their favorite food is grass, but they enjoy an apple here and there.

Goats are farmed for meat and for dairy. Some propaganda, don’t know where it started claims that goat milk is exceptionally healthy. And I agree 100% with that statement, but the goat milk is only fit for a baby goat. Humans should stick to the mother’s milk, and we know that many mothers stop breastfeeding their baby for god knows whatever reason or what the hell are they thinking to stop giving the real baby milk.

If you managed to watch until this chapter without breaks, then you probably think that the situation with fish cannot be so emotional like with other animals mentioned so far. And it is true that there is less blood and fish as an individual is not in focus. But if you look at the numbers which are not measured in units, but on tons. It is impossible to write the number in units killed each year, that why the measurement is done in tons. That is genocide on another species that will mark our generation. Whatever we do, this already happened and it is marked. People that will live in 100 years from now will read about this. If we continue with this fish-killing ratio until 2048, there will be no fish in the ocean.

Poor wabbits. What can I say? I am sad that a human can do this to another fellow being. Rabbits are farmed for meat and fur. Fur is most of the time skinned down from a living rabbit and not once, but several times before they actually kill the poor animal. 12 rabbits are needed for an Akubra hat. The Akubra hat is a famous Australian hat. What kind of sick world is this?

Minks are used for fur which is later on used in many products. If you are buying something that may contain fur make sure it is not animal fur. Fake fur or so-called Faux Fur is as good as any other fur, so I am asking again in what kind of a sick world are we living???

Foxes, just like ducks are used for entertainment, hunting and as well for the skin. Just after Minks, Fox is the second farmed animal for fur. Once you see the skinning of the fox you will puke, trust me.

In China, they skin dogs for fur. Most of the time this fur is sent to other parts of the world under another label because I am sure most people in the world and not that sick to wear a dead dog around the neck. They are sick enough to wear rabbits, foxes, minks, but no, at dogs they draw a line.

Such a cute animal, big like a cow, but abused just like the cow as well. Abused for racing and other types of entertainment. Did you know if the horse injures himself on the race they kill him right on the spot? Now go gamble on suck a sick sport, not sure if we should call this a sport.

Do you know some people eat horse meat? I hope I never meet that people.

Camels are used for milk and meat. Australia is full of camels they are moving through the Australian desert without restraint. But the government decided to cut their numbers and since then are hunted and abused.

Mice is a sweet, cute little animal. Harmless mice are used in science. Many tests and researches are done on the mice. If for some reason mice survive the lab tests he needs to be killed because he can not leave the laboratory. In other words, all the mice you have seen in laboratories are killed, sooner or later.

Animals trapped in Zoos so you can see your favorite animal, but with those same eyes, you don’t see that that same animal is suffering and is imprisoned. Some parents even take their kids, to teach them that the animals need to be caged, so these kids, once they grow up, can follow the same politics. Kids, you are better than that, next time you hear parents taking you to zoo or animal circus, say NO!

Seals and Dolphins are remarkable sea animals with high intelligence. Dolphins are considered to have high intellect and consciousness. But still, we have a place called Cove in Japan where Dolphins are slaughtered in masses. You would think Japanese is an advanced nation, but the Cove documentary says something else.

“The Link” is a term used in science that proves that there is a direct link between animal abuse and domestic violence. From 49% to 71% of battered women reported pet abuse by their partner. That alone is enough to make the link that the people who abuse animals are more prone to abuse humans as well. Now in the Dominion video, you have to see the worst abusers on the planet earth, I hope you don’t live near them. But don’t think you are safe, your local place most probably has the farm or slaughterhouse with such people. 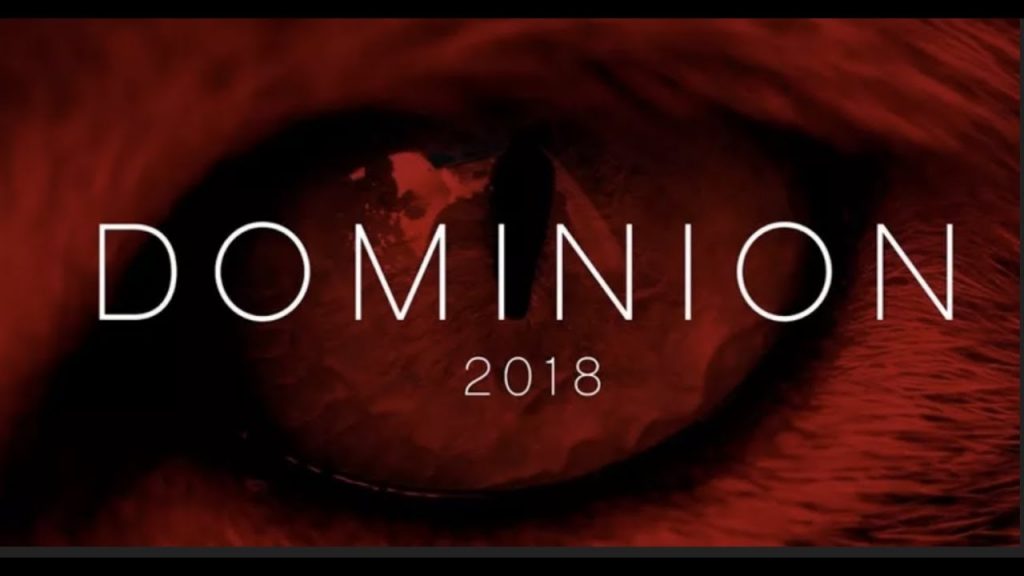 Vegan or not, you must watch Dominion, it is for your own sake and for the purpose of your family. The animal genocide cannot go long anymore. People are aware and just like the opening sentence says: ” Most people consider themselves animal lovers.” If you genuinely are animal lover then stop supporting animal abuse. Switch to a plant-based diet, be kind to animals and don’t use them for entertainment. In 100 years from now, I am sure there will be no animal abuse and the world will no longer have concentration camp and gas chambers.

If you watch the movie, please share your emotions with us by commenting below or on Facebook.